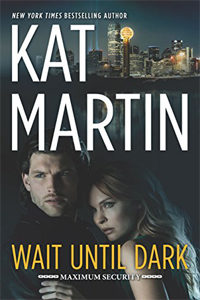 Wait Until Dark is a novella, part of a new series set in Dallas that begins with The Conspiracy.  Chase Garrett is the mega rich owner of Maximum Security, a company whose clients cater to the Dallas elite.  The office is staffed by private detectives, bail enforcement agents, and personal security specialists.  Chase also owns branches in Phoenix and San Diego.

In Wait Until Dark, Jonah Wolfe is one of the private investigators who works for Chase.  Wolfe’s client, April Vale, is a beautiful redhead accused of murder.  Marketing director for the mayor of Dallas, April woke up naked in bed with the mayor’s campaign manager.  David Dean was also naked, his body covered in blood from a bullet hole in his chest–a shot fired from April’s gun.

It’s up to Wolfe–with April’s help–to find the truth of what happened the night of the murder.  All the while they struggle with a powerful attraction they can’t afford to feel.  Not when April’s life is in danger.  Not when Jonah is determined to keep her safe.

Together, the pair work to find the killer–before April winds up as dead as David Dean.