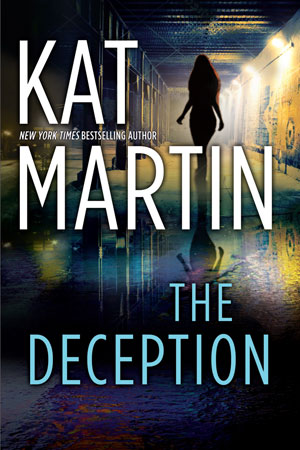 When it comes to Romantic Suspense, one of the most import and often the hardest thing to do is to find the right match for the hero or heroine who is the primary character in the book.  In THE DECEPTION, Hawk Maddox is a former Marine, a strong, tough, sometimes reckless, chance-taker.  I needed a woman who was equally strong, tough-yet-feminine woman who could handle his reckless nature.

And because Hawk was an extremely virile male, a passionate woman, as well.

Kate Gallagher was all of those things.  She also strongly believes in justice, which means finding the killer who murdered her sister takes precedence over a relationship with Hawk.

As the two are thrown together in their search for a killer, Hawk and Kate begin to appreciate the strengths they find in each other.

And there is the sexuality that vibrates between them. Though Hawk wants Kate from the moment he spots her on the dance floor of the Sagebrush Saloon, he understands her grief and her resolve.  Though the time isn’t right, Hawk comes to believe Kate Gallagher is a woman worth waiting for.

Working to make them a couple was fun, and of course sending them on a dangerous, desperate adventure added to the excitement of writing the book.

I hope you’ll look for THE DECEPTION, and if you haven’t read Chase Garrett’s story, THE CONSPIRACY, I hope you’ll give it a try.

Until next time, all best and happy reading.