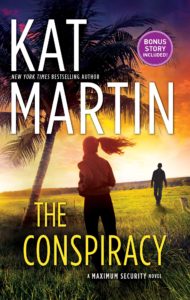 I’ve always been a plot-oriented writer.  People ask me how I come up with ideas for my novels and the truth is, I don’t really know.

Prior to the release of my first hardcover novel, THE CONSPIRACY,I wrote a very short digital story–AFTER THE SUNRISE, just published on Amazon–mostly because I woke up on a Saturday morning with the story fully developed in my head.  Kurt Layton seemed like a great hero and I thought it would be a good way to introduce my first hardcover novel. Now six months later THE CONSPIRACY will be released in paperback on July 30th.

Chase is the oldest of the three Garrett brothers.  He and Brandon, the youngest, a former soldier, are true Texas men, comfortable in cowboy boots no matter where they are.  Reese, the middle brother, is CEO of Garrett Resources, the family-owned, billion-dollar oil and gas company.

The brothers, though each is his distinctly his own person, have a very strong bond.  They’re the kind of men who are there for each other, no matter what happens.

In THE CONSPIRACY, Harper Winston’s brother has disappeared.  Pursuing his dream of sailing the Caribbean, Michael hasn’t responded to texts or emails in days.  When even the Coast Guard can’t find him, Harper is forced to take desperate measures.  Which means going to Chase Garrett, once her brother’s best friend, now the only man she can trust…or so she hopes.

But the last thing Chase wants is to get involved in the Winstons’ snarled crime family.  No way should he take the case, but old loyalties die hard.

As danger draws him closer to Harper and deeper into trouble, Chase is forced to put everything on the line to keep Harper safe–and both of them alive.

I hope you’ll watch for THE CONSPIRACY and that you enjoy it.  I’ll have three more high-action, sexy romantic thrillers coming your way in the future.  Till then, all best and happy reading.