A Dangerous Harbor
by RP Dahlke

Her idyllic sailing vacation in Mexico is about to become very dangerous.

Bleary-eyed and sleep deprived after a long overnighter into Mexico, solo sailor and SFPD police detective, Katrina Hunter, thinks the mermaid twenty yards behind her thirty-two foot Westsail is nothing more than a sailor’s hallucination. But everything she knows about floaters convinces her to turn her boat around for another look. Now, alone and isolated in the Mexican port’s police station for the last six hours, she’s convinced that reporting the body of a floater to authorities was a mistake. Even the arrival of a handsome, if somewhat dour, Mexican/Italian investigator, does nothing to dispel her growing anxiety that she’s about to be charged with the murder.

Chief Inspector, Raul Vignaroli, is as surprised by the attractive solo-sailor as he is to find that she’s a respected member of the San Francisco police force, and after some well-placed phone calls he’s sure that he’s found the perfect partner to help him solve a murder, if not the cure for his broken heart.

A mermaid, a bald parrot, the past she’d hoped to leave behind and perhaps the love of her life… all in A Dangerous Harbor.

Other Books by RP Dahlke 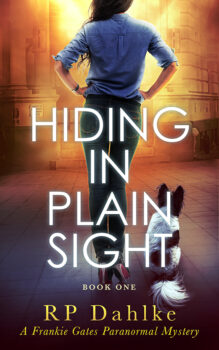 RP, AKA Rebecca Dahlke was raised on her father’s 80 acres of Almonds & crop dusting ranch south of Modesto, California. She’s been writing since 1994, first with a writing group in the East Bay Area and then when she and her husband went sailing. My protagonist for the Dead Red Mystery series is a tall, blond ex-model turned crop-duster who, to quote Lalla Bains, has “been married so many times they oughta revoke my license.” Lalla is no Danielle Steele character & she’s not afraid of chipping her manicure. Scratch that, the girl doesn’t have time for a manicure. The first three books are based in the Central Valley of California. Beginning with A Dead Red Alibi, Lalla and family move to South East Arizona where she and cousin, Pearlie Bains, will continue to their unearth killers as Wishbone, Arizona’s newest P.I.s. My romantic suspense books are also on Kindle: A Dangerous Harbor, and Hurricane Hole. If you liked my Lalla Bains series, I know you’ll love these books: More romance, more suspense, and in an exotic location with nastier bad guys and a bald parrot! Want to receive advance notice of my next book? Go to the Contact Me tab and send me an email! Memberships: Sisters in Crime, National and Tucson Chapter AZ chapter of Sisters in Crime.