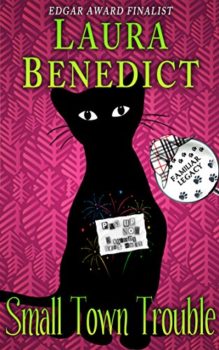 Five years ago I was the least likely person I knew to be a reader of cozy mysteries.  Okay, maybe my son and husband are actually the least likely people. Their tastes run to science fiction, classics, and grittier stuff. But as a writer of supernatural suspense novels and stories, I was pretty darned unlikely to read anything with “cat” or  “the mystery of the…” in the title.

What’s a cozy mystery? It’s a mystery/crime story in which the person who solves the mystery is an amateur sleuth, and the sex and violence in the story is either off-scene or not graphic. These stories tend to take place in a small town, village, or a rather closed community. The small number of characters often limits the number of suspects.

Agatha Christie’s Miss Marple novels are considered cozies. Miss Marple is always more clever than the police who are involved.  M.C. Beaton’s Agatha Raisin is a former public relations executive who moved to the English Cotswolds for a quieter life, but has found herself unable to stop investigating murders. Eventually she opens her own detective agency, but she’s still an amateur, not a cop.

To be perfectly honest, I was a book snob for many years. I thought cozies were…unsophisticated. My first mystery stories were the Nancy Drew books I read until the 7th grade, at which time I decided I was way too cool for them.  Agatha Christie was fine with me, but I found Stephen King’s books way more exciting. Over the next few decades, I watched Poirot on television and read the occasional Christie for a lark, but I mostly stuck with darker crime and classic novels and stories.

Gosh, am I glad I’ve come full circle. Even though I often read and have written (seven) suspense novels that are way more unsettling than cozy, I’ve discovered that darkness—like chocolate and cognac—is best enjoyed in moderation. I live with a lot of scary stories in my head, and I devour online and television crime stories. But sometimes I want to laugh, or get a little teary, or have fun just figuring out a clever plot puzzle.

Cozy mysteries are perfect for those times. I avidly await Charlaine Harris’s next Aurora Teagarden mystery, and Beaton’s next Agatha Raisin. I now totally understand my readers who tell me they wish I wrote faster. Most of the cozies I read are in the form of audio books. It’s really nice to have a story set in England read by someone with an authentic accent. (Though I recently listened to a mystery set in England that had an American female protagonist. The publisher really screwed up by having a Brit actor doing an American voice. Ugh.) My current favorite series is M.C. Beaton’s Hamish Macbeth series. If you know it, you know that Hamish is actually a policeman. But he’s a Scottish bobby who solves mysteries attached to a very small Highland village, and he gets a lot of help from the residents. He despises his big-city bosses who occasionally get involved. His stories are cozies by every other definition.

Is it any wonder that I decided to try my hand at writing a cozy? It was a big risk for me, and I had to write it in the same year I also finished my next suspense novel, The Stranger Inside (Mulholland Books, February 2019). I love a challenge, and writing a cozy was quite the challenge. My tap of darkness had to be turned nearly all the way off. When I typed the end on Small Town Trouble I felt a huge sense of accomplishment. I’d written an entire novel without a ghost or on-scene brutal crime or steamy sex. Most of all, I’d had a great time doing it.

Small Town Trouble is the fifth book in the Familiar Legacy Series about a clever, mystery-solving black cat named Trouble—and you don’t get much cozier than that. Four different, terrific authors wrote the first four books. There’s a little romance in the Trouble novels, too. In Small Town Trouble he helps a young woman named Erin Walsh solve the kidnapping of her saucy stepmother, Shelby Rae, and the murder of one of her oldest friends. There’s also a handsome guy, Noah, who wants to get to know Erin better. But only Trouble can help Erin solve the mysteries, and tell her whether or not Noah is involved in the crimes or the real deal.

It’s good for us to stretch our wings and try new things. I’m so glad I did. I feel like my writing world is in balance.

If you haven’t read any cozies, think about giving them a try. The book world is full of them, and they’re just waiting for you to come into the light and enjoy. 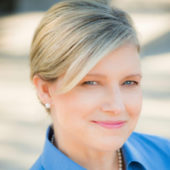 Laura Benedict is the Edgar- and ITW Thriller Award- nominated author of seven novels of suspense, including the forthcoming The Stranger Inside (February 2019). Small Town Trouble, her latest book, is a cozy crime novel. Her Bliss House gothic trilogy includes The Abandoned Heart, Charlotte's Story (Booklist starred review), and Bliss House. Her short fiction has appeared in Ellery Queen's Mystery Magazine, and in numerous anthologies like Thrillers: 100 Must-Reads, The Lineup: 20 Provocative Women Writers, and St. Louis Noir. A native of Cincinnati, she lives in Southern Illinois with her family. Visit her at www.laurabenedict.com to read her blog and sign up for her quarterly newsletter.

It’s Time to Get Cozy