I have a confession to make. I’m a big chicken. I’m the girl who checks the doors three times before bed to make sure they’re locked and made my husband get an alarm system because the golf club by my bed when he was away for work just wasn’t enough. I’ve never liked scary movies, shows, or books. I blame my over active imagination. When I was younger, and my older brother had friends over, I’d pretend those horror films were so lame but then would end up sleeping on the floor of my parent’s bedroom.

None of that has really changed. Except I discovered how much I loved to read romantic suspense novels. I loved following the trail and trying to figure out the ending. When I decided to try my hand writing romantic suspense, I was hooked with the fast-paced scenes and the mounting tension. And since I was the one in control of what happened to the characters, the scariness of it melted away.

Until I got the idea to write Girl Long Gone. I was lucky enough to meet my husband in college before dating sites became a big thing. As they started to get more popular, the paranoid side of me always thought how I’d never be able to meet some guy I only spoke with on a computer. Who knows that kind of lines he could feed me! Who was he in his every day life? From here, I knew I wanted to write a story about a girl who was taken by a man she met off one of these sites. The catch was, I wanted to write this story from three points of view—the hero, the heroine, and the villain.

Now, if you read Girl Long Gone, you’ll find out from the very first page who the villain is. The scaredy cat side of me thought, okay…this works. I mean, the guy’s a psychopath and kidnaps women. That’s plenty of thrill for the readers.

But I was wrong. I needed more than showing what a bad person this guy is. I needed strong motivation. I needed to show how this guy who lives his life in the open, who a NYPD detective knows is behind his sister’s disappearance, keeps one step ahead of everyone.

I needed to do some research. How could I show the readers how scary this guy was when I was opening their eyes to his existence from page one? How do I keep them turning the page, invested in what was happening next, when the element of the big surprise was already gone? I needed to watch someone else in this role, someone who scared people so badly, he haunted them for days after they’d closed the book…or ended the movie.

I watched Silence of the Lambs. I mean who’s scarier than Hannibal Lector? Even though I knew he was bad from the beginning. Hell, the guy was in prison…secured behind bars…and he still manages to be one of the most terrifying characters out there. Why? Because he’s smart and cunning and manipulative.

All the things I wanted my villain to be.

So I watched the movie, stayed up all night thinking someone had made it past my security system and was in my house, and used the inspiration from that character to turn my romantic suspense into a romantic thriller. I turned the kidnapping of an innocent woman into a cat and mouse story where the villain is always one step ahead. And, hopefully while you’re flying through the pages and reading about how the game plays out, the whole time the life of an innocent woman hangs in the balance.

Girl Long Gone is a book that took me completely out of my element. It made me investigate parts of myself that I’d refused to explore since a child. A part that, even though is still terrified of the boogey man and needs to keep the lights on at night, gets excited about the unknown and experiences a thrill out of keeping my eyes open to see the scary parts.

Just don’t tell my husband, or he’ll make me start watching more of those scary movies. But who knows? Maybe if I do, more inspiration will hit.

So tell me, do you like to watch scary movies? Comment with your answer for a chance to win a digital copy of Girl Long Gone. 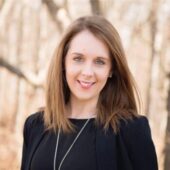 Danielle Haas resides in Ohio with her husband and two children. She earned a BA in Political Science many moons ago from Bowling Green State University, but thought staying home with her two children and writing romance novels would be more fun than pursuing a career in politics. She is a member of Romance Writers of America, as well as her local North East Ohio chapter. She spends her days chasing her kids around, loving up her dog, and trying to find a spare minute to write about her favorite thing: love.

How A Scaredy Cat Wrote A Romantic Thriller