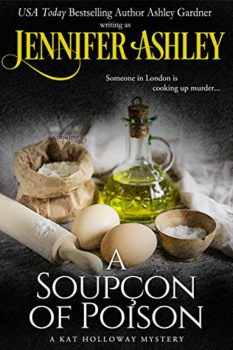 A Soupcon of Poison

A Soupcon of Poison
by Jennifer Ashley

Note: This work also appears in the anthology, Murder Most Historical.

Kat Holloway, highly sought-after young cook to the wealthy of London, finds herself embroiled in murder when she's accused of poisoning her employer, the loathsome Sir Lionel Leigh-Bradbury. Her only help as she works to clear her name comes from the mysterious Daniel McAdam, a handsome man-of-all-work who seems to know everyone and always happens to be in the right place at the right time. Kat and Daniel investigate the crime, but the mystery of Daniel's background might be just as elusive and dangerous as the poisoner bent on framing Kat for murder.