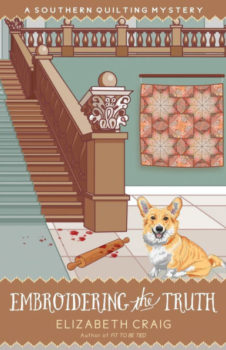 Embroidering the Truth
by Elizabeth Craig

Little white lies can add up to big trouble.

Felton Billows is known around the small town of Dappled Hills as something of a show-off. She’s always dressed-up. She drives a luxurious car. And she has a quite spectacular diamond ring that she’s fond of waving around.

Felton, unfortunately, has other issues, too. She’s not particularly kind to the people who work in her yard and run errands for her. Aside from that, Felton complacently alludes to the fact that she knows a few secrets.

When Felton is discovered dead, it’s still a shock—this is Dappled Hills, after all. But it may not be easy to unravel the mystery when quite a few suspects come to light. Can Beatrice uncover the murderer before he strikes again?

Other Books by Elizabeth Craig

Knot What It Seams
A Southern Quilting Mystery #2

Elizabeth writes the Memphis Barbeque series for Penguin/Berkley (as Riley Adams), the Southern Quilting mysteries (2012) for Penguin/NAL, and the Myrtle Clover series for Midnight Ink. She blogs daily at Mystery Writing is Murder, which was named by Writer’s Digest as one of the 101 Best Websites for Writers for 2010 and 2011.

Elizabeth is active in the online writing community. She shares writing-related links on Twitter as @elizabethscraig and posts on craft and the publishing industry on her blog, Mystery Writing is Murder. She and Mike Fleming of Hiveword also manage the Writer’s Knowledge Base—a free search engine to help writers find resources.

As the mother of two, Elizabeth writes on the run as she juggles volunteering, referees play dates, drives carpools, and is dragged along as a hostage/chaperone on field trips.