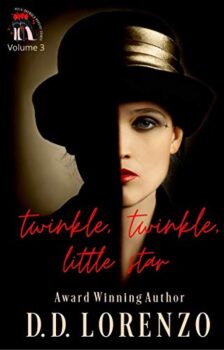 Twinkle, twinkle, little star
You’ve shown me what a cad you are.
Things didn’t turn out as you said.
I won’t rest until you’re dead.

You thought that I was so naive.
You had deceit tucked up your sleeve.
Your lies were sweet. Your words untrue.
Soon I’ll put an end to you.

Women in the 1940s were known to be creative, and Mavis Travers was no exception. Men ruled the town, and women obeyed them, ever mindful of their inferior place in society. As the owner of Main Street’s flower shop, “Belles Fleurs,” Mavis had hoped for equal regard, at least in matters of business.

But she was wrong.

Chauvinism ran deep in the heart of the affluent town of Norrisville, corrupting it with male dominance. The air of superiority so thickened the air it nearly choked her. When Mavis’s encounter with one of its most respected members, Oliver Randolph Bennett III, leaves her in misfortune, it isn’t long before she realizes that if justice is to be served, it must be delivered by a petite hand.

Unfortunately, even the most delicate fingers can be deadly when holding the right weapon.

Other Books by D.D. Lorenzo

D.D. Lorenzo is an award-winning author. With stories filled with love and hope, she weaves emotions into the tapestry of her novels. A “Reader’s Choice” gold medal winner, she strives to pull at the heartstrings of her readers while inviting them into the world of her characters. D.D. lives on the US East Coast, enjoying the seashores of Maryland, Delaware, Virginia, and New Jersey. When she isn’t writing, she enjoys rides on the back of her husband’s Harley Davidson, immersing herself in the beautiful landscapes they travel. If you want to know when D.D.’s next book will come out, please visit her website at www.ddlorenzo.com where you can sign up to receive an email when she has a new release. D.D. is represented by SBR media. Contact stephanie@SBRmedia.com You can find D.D. on Facebook, Instagram, Twitter, Pinterest, Goodreads, and at www.ddlorenzo.com