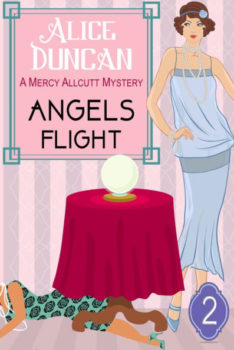 Mercy Allcutt is thrilled with her new job as secretary to private investigator Ernie Templeton—until she opens the door and discovers her mother on the doorstep.

Known to her friends as Honoria and to her daughters as the Wrath of God, Mrs. Allcutt is the last person on earth whom Mercy wants to see—barring a couple of cold-blooded murderers she’s met in the past few weeks.

But more surprises lay ahead for the aspiring sleuth: a couple of phony spiritualists, a Hollywood gossip columnist who gets bumped off during a séance, a semi-famous starlet, and several other colorful characters. Soon Mercy finds herself in very deep waters indeed.

Publisher Note: Readers who enjoy cozy mysteries in historical settings are sure to appreciate the Mercy Allcutt series set in 1920s Los Angeles, California. No vulgarity or explicit sex for those who appreciate a clean and wholesome read.

Other Books by Alice Duncan

Alice Duncan has written many novels under her own name. She’s also written as Emma Craig (her maternal grandmother’s maiden name), Rachel Wilson (her mother’s middle and maiden names), Anne Robins (her daughters’ names), and twice as Jon Sharpe (the fictitious author of the “Trailsman” series). She was born and reared in Pasadena, California. When she was three months old, the family moved to a farm between Kezar Falls and Cornish, Maine. Alice’s father was born in Hartland, Maine, which explains the Maine connection. The only thing Alice remembers from her life back east is her mother telling her never to eat yellow snow. Although her family moved back to California when she was four, many of Alice’s relations still live in Maine. When California became too expensive for her, Alice moved to Roswell, New Mexico, where her mother’s family settled fifty years before the aliens crashed. Alice and her herd of dachshunds live in a house her uncle built on the property her maternal grandmother bought in 1903. When she lived in California, Alice loved writing books set in the Old West. Now that she lives in New Mexico, she wishes she could return to California. Unfortunately, California is still too expensive for her. Because her two daughters remain there, Alice visits California as often as she can. When she’s not writing, Alice Duncan rescues wiener dogs. She used to sing, but bronchitis put an end to her singing career in 2018. Kind of like Julie Andrews, only a couple of octaves lower.