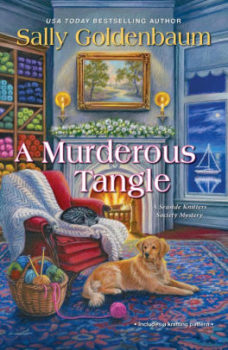 A Murderous Tangle
by Sally Goldenbaum

Birdie, Nell, Cass, and Izzy are prepping their coziest handiwork for a holiday gathering in Sea Harbor, Massachusetts. But as murder makes waves in their tightly knit coastal village, can the Seaside Knitters prevent a deadly trend from catching on?

While the Seaside Knitters get ready to showcase their new Danish-inspired event, locals can’t stop talking about Tess Bean—a bright-eyed environmental activist with a way of charming both animals and humans alike. Birdie’s granddaughter is mesmerized by ethereal Tess’s passion for saving the earth and ocean, and even Izzy’s old Irish setter becomes attached to the young woman’s gentle touch . . .

Except not everyone is a fan of Tess and her strong opinions, especially after she starts questioning the “clean” practices of small-business owners. So when a popular bar owner whom Tess publicly calls out for bad practices is found dead from a fall off his club’s deck, it’s not long before she tops the suspect list for murder . . .

In addition to a murderer walking their streets, the knitters are also grappling with an unusual wave of thefts up and down Harbor Road. Now, as Birdie’s granddaughter struggles to protect her mentor’s reputation, the Seaside Knitters must solve a dangerous mystery that not only threatens to unravel the fabric of their community and the approaching holiday, but also the lives of those they care about the most . . .

Other Books by Sally Goldenbaum 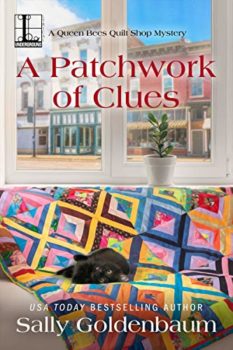 Life.....It’s been a meandering, interesting journey that began in Manitowoc, WI, a town on the shores of Lake Michigan. There my father built ships, my mother stayed home, and my sisters, brother and I lived an easy small-town life. After high school, I moved to St. Louis (college); then Bloomington, IN (graduate school); and several other places along the way. Jobs included working in public television—with Mr. Rogers and his neighborhood just down the hall; teaching Latin, creative writing, and philosophy;  and very early along that journey, living in St. Louis as a Catholic nun. A checkered past, of sorts.

After marrying a nice Jewish man whom I met in graduate school (my mother always said she had named me Sarah for a reason), a job brought us to a small town (Prairie Village), attached to a big city (Kansas City) and the home we still live in.

And it was here that my writing life took root.

The seeds to writing a novel—or rather ‘finishing’ a novel—were planted in a sandbox in a park, not far from our Prairie Village home. It was there I met another newcomer to the area, Adrienne Staff, a woman who would become a life-long friend. While our children played together in the sand that day, I learned that not only was Adrienne as hungry for friendship as I was, but both of us loved to read and write and had drawers filled with unfinished novels. In no time at all we decided that perhaps the key to finishing a novel (at least, in our case) was to write a booktogether. A match made in heaven—a nice Jewish girl from New York and an ex-nun—certainly a pair with diverse experiences to spare! We’d hold one another to the task and we would complete a book and rid ourselves of the awful unfinished novel curse.

And so we did. Soon after finishing our first book, we found our wonderful agent, Andrea, and went on to publish a dozen or more novels together.

Years later friendship again played a huge role in my publishing life—this time in the person of Nancy Pickard, who invited me to help her with a mystery she was working on. Nancy turned a blind eye to the fact that I had never written a mystery—and together we sat and drank coffee and talked and wrote and rewrote, examined red herrings and twists and turns, and talked some more. And we finished the mystery.

After that, I was hooked! Now not only did I love to read mysteries, I loved to write them, too. How fortunate I was to have learned from a pro—and then to have lucked into my first mystery series, The Queen Bees Quilters mysteries.

A couple of years and three mysteries later, my life took another marvelous turn: my first grandchild! And along with baby Luke was born a new mystery series, The Seaside Knitters mysteries. (Grandchildren....knitting....it was meant to be.) Luke’s parents live in a charming seaside town on Cape Ann, just north of Boston. A perfect place for a mystery series. And a perfect place for the series’ author to visit OFTEN—to research plots, check out life on the dock, eat lobster—and to watch Luke, his now five-year-old sister Ruby, and his brand new brother Dax grow and thrive.

And more grandchildren followed right here in Kansas City. All together there are now six amazing little people who fill our lives and hearts and keep me writing mysteries.