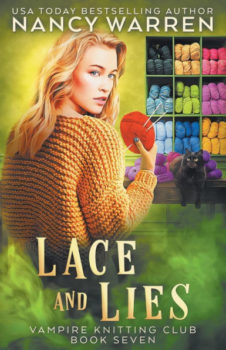 Lace and Lies
by Nancy Warren

Cardinal Woolsey’s Yarn Shop has been chosen to appear on TV
Great publicity!
Until a murder stops the cameras…

Celebrity knitting designer Teddy Lamont is coming to Cardinal Woolsey’s knitting and yarn shop in Oxford to run a special class that will be televised.

But from the first day things go wrong. One student is nothing but trouble on and off camera. When she winds up dead, the publicity Lucy was hoping for turns out to be the wrong kind.

Lucy and her band of undead amateur sleuths have to figure out who the killer is before her business winds up dead.

Book seven in the best-selling Vampire Knitting Club series can be read on its own, but it’s also fun to read the entire series. You’ll find quirky characters, genuine mysteries, a novice witch and vampires who love to knit, but no violence, gore or swearing. Just good, clean, (murderous) fun.

Other Books by Nancy Warren 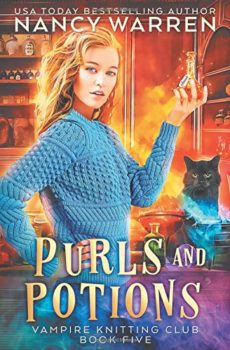 Nancy Warren got her big break when she won Harlequin's Blaze contest (unpublished category) as part of an author search for the new, hot Blaze line. When Nancy 'got the call' it wasn't for just one book, but three books in three different lines: Temptation, Duets and Blaze. She went on to sell a total of seven books to Harlequin within a year.

Her first novel Flashback was a July 2001 Temptation.

Nancy has an honors degree in English literature and has had previous careers in Journalism and Public Relations.

She lives in the Pacific Northwest with her husband, two children and an ever expanding assortment of pets.

You can reach Nancy at www.nancywarren.net