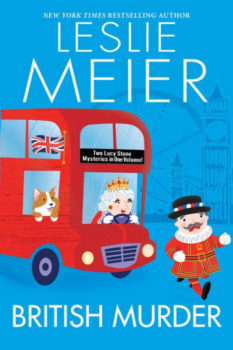 Lucy Stone’s hometown of Tinker’s Cove, Maine, is where her heart is. But traveling to merry old England brings delightful adventure—along with a helping or two or murder—in these beloved mysteries . . .

A trip to England, sponsored by Winchester College, sounds practically perfect to Lucy Stone—until the tour leader suffers a fatal asthma attack mid-flight. Lucy suspects some very unnatural causes, but luckily, she packed her sleuthing skills. Between stops for afternoon tea, visits to historic sites, and catching up with an old flame, she’s ensnared in a daring scheme. But will it lead her to a criminal mastermind—or ensure that she’s the next victim?

Lucy can’t wait to join her friend Sue for a gala hat show at the English country house owned by the Earl of Wickham. But at Moreton Manor, there are secrets—and some unpleasant relatives—lurking among the elaborate chapeaus. When a bludgeoned body is found in a hidden room, Lucy must sift through friends and family foes

Other Books by Leslie Meier 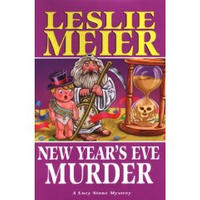 I started writing in the late ‘80s when I was attending graduate classes at Bridgewater State College. I wanted to become certified to teach high school English and one of the required courses was Writing and the Teaching of Writing. My professor suggested that one of the papers I wrote for that course was good enough to be published and I sent it off to Ellery Queen’s Mystery Magazine’s Department of First Stories. I got $100 for the story and I’ve been writing ever since. The teaching, however, didn’t work out. My books draw heavily on my experience as a mother of three and my work as a reporter for various weekly newspapers on Cape Cod. My heroine, Lucy Stone, is a reporter in the fictional town of Tinker’s Cove, Maine, where she lives in an old farmhouse (quite similar to mine on Cape Cod!) with her restoration carpenter husband Bill and four children. As the series has progressed the kids have grown older, roughly paralleling my own family. We seem to have reached a point beyond which Lucy cannot age—my editor seems to want her to remain forty-something forever, though I have to admit I personally am dying to write “Menopause is Murder!𔄩 I usually write one Lucy Stone mystery every year and as you can tell, my editor likes me to feature the holidays in my books. Of course Christmas is one of my favorite times of the year and my newest mystery “Eggnog Murder,” is included in an anthology with two other Christmas novellas by Barbara Ross and Lee Hollis. I’ve long been a fan of the classic English country house mystery, and was a faithful watcher of “Downton Abbey,” so I couldn’t resist trying to write one. I think I succeeded rather well, if I do say so myself, with “British Manor Murder,” which came out in October, 2016. My books are classified as “cozies” but a good friend insists they are really “comedies of manners” and I do enjoy expressing my view of contemporary American life. Now that the kids are grown — we have five fabulous grandchildren — my husband and I are enjoying dividing our time between Braintree and Cape Cod, along with our cat, Sylvester.