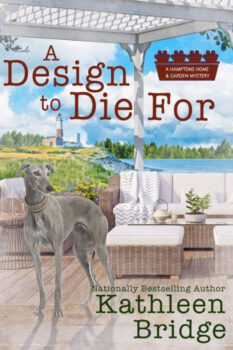 A Design to Die For

A Design to Die For
by Kathleen Bridge

Montauk’s first annual Designer Showhouse was meant to be a collaborative event, so decorator Meg Barrett can only despair at the group of cutthroat designers scheming to sabotage each other on the project, not to mention the oddball collection of ghost hunters slinking around to investigate a supposedly haunted cottage. But when one of the owners of the showhouse is found murdered on the rocky beach below, Meg suddenly finds herself clashing with local police because of evidence that points to her as a prime suspect.

Desperate to clear her name and track down the real culprit, Meg discovers that many of her fellow designers despised the victim for his unscrupulous business dealings, while others were speculating about his extramarital affairs. And as more secrets emerge about both the deceased and the many outsiders who have come together for the showhouse, Meg realizes she’ll have to decipher a murky pattern of clues to escape the killer’s deadly designs on her…

“Discerning cozy mystery fans who delight in well-developed characters, rich detail, and a smart plotline will find that Kathleen Bridge’s A Design to Die For is their cup of tea!” —Ellery Adams, New York Times and USA Today Bestselling Author

Other Books by Kathleen Bridge 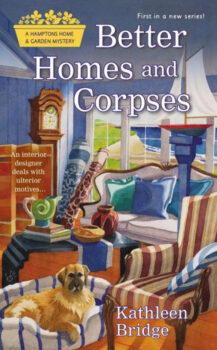 Kathleen Bridge started her writing career working at the Michigan State University News in East Lansing, Michigan. She is the author and photographer of an antique reference guide, Lithographed Paper Toys, Books, and Games, and the author of Revenge of the Sports Widows—How to Cope with a Sports Fanatic. She is a member of Sisters in Crime and has taught creative writing classes at the William Cullen Bryant Library in Roslyn, New York. Kathleen is also an antiques dealer in Long Island, New York, and has contributed to Country Living magazine.