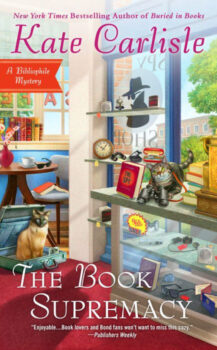 The Book Supremacy
by Kate Carlisle

Newlyweds Brooklyn and Derek are enjoying the final days of their honeymoon in Paris. As they’re browsing the book stalls along the Seine, Brooklyn finds the perfect gift for Derek, a first edition James Bond novel, The Spy Who Loved Me. When they bump into Ned, an old friend from Derek’s spy days, Brooklyn shows him her latest treasure.

Once they’re back home in San Francisco, they visit a spy shop Ned mentioned. The owner begs them to let him display the book Brooklyn found in Paris as part of the shop’s first anniversary celebration. Before they agree, Derek makes sure the security is up to snuff—turns out, the unassuming book is worth a great deal more than sentimental value.

Soon after, Derek is dismayed when he receives a mysterious letter from Paris announcing Ned’s death. Then late one night, someone is killed inside the spy shop. Are the murders connected to Brooklyn’s rare, pricey book? Is there something even more sinister afoot? Brooklyn and the spy who loves her will have to delve into the darkest parts of Derek’s past to unmask an enemy who’s been waiting for the chance to destroy everything they hold dear.

Other Books by Kate Carlisle 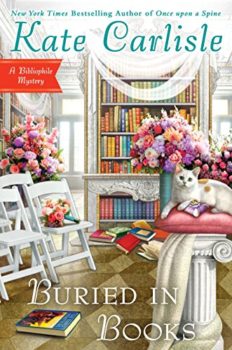 Crowned and Moldering
A Fixer-Upper Mystery #3

Ripped From the Pages
A Bibliophile Mystery #9

This Old Homicide
A Fixer-Upper Mystery #2

A High-End Finish
A Fixer-Upper Mystery #1

A Cookbook Conspiracy
A Bibliophile Mystery #7

A Cookbook Conspiracy
A Bibliophile Mystery #7

Peril in Paperback
A Bibliophile Mystery #6

One Book in the Grave
A Bibliophile Mystery #5

Murder Under Cover
A Bibliophile Mystery #4

The Lies That Bind
A Bibliophile Mystery #3

Golden Heart and Daphne du Maurier Award winning author Kate Carlisle spent over twenty years working in television production as an Associate Director for game and variety shows, including The Midnight Special, Solid Gold and The Gong Show. She traveled the world as a Dating Game chaperone and performed strange acts of silliness on The Gong Show. She also studied acting and singing, toiled in vineyards, collected books, joined a commune, sold fried chicken, modeled spring fashions and worked for a cruise ship line, but it was the year she spent in law school that finally drove her to begin writing fiction. It seemed the safest way to kill off her professors. Those professors are breathing easier now that Kate spends most of her time writing near the beach in Southern California where she lives with her perfect husband.

A lifelong love of old books and an appreciation of the art of bookbinding led Kate to create the Bibliophile Mysteries, featuring rare book expert Brooklyn Wainwright, whose bookbinding and restoration skills invariably uncover old secrets, treachery and murder. Kate is a member of Sisters in Crime, Mystery Writers of America, International Thriller Writers and Romance Writers of America®. She loves to drink good wine and watch other people cook.

Despite the appearance of overnight success, Kate's dream of publication took many, many years to fulfill. If you're wondering why, here's the real scoop.