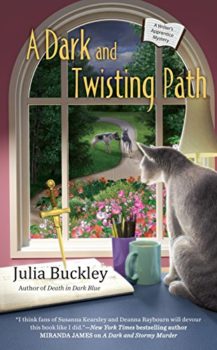 A Dark and Twisting Path

A Dark and Twisting Path
by Julia Buckley

Writer’s apprentice Lena London is happily working on a new collaboration with her idol and bestselling suspense novelist and friend Camilla Graham, but her joy is short-lived when a dark cloud descends upon the quaint town of Blue Lake, Indiana…

Lena’s best friend, Allison, is in a panic. On a walk in the woods by her home, Allison discovers the body of her mail carrier, an argumentative man who recently had a falling out with Allison’s husband. Lena quickly realizes that Allison has nothing to worry about as the murder weapon points to a different suspect altogether: Lena’s embattled boyfriend, Sam West.

Sam was cleared of his wife’s murder when she was found alive, and now someone is trying to make him look guilty again. Surveillance video of a break-in at his house shows a shadowy figure trying to incriminate him by stealing the weapon from his desk. Lena and Camilla work on a suspect list, but a threatening note and a violent intrusion at Graham House prove that the devious killer has decided to write them into the plot.

Other Books by Julia Buckley 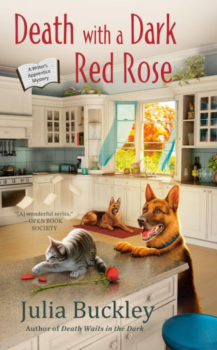 Julia Buckley is a Chicago mystery author. She writes the Writer’s Apprentice Mysteries, the Undercover Dish Mysteries, and the Hungarian Tea House Mysteries. Her novel A Dark and Stormy Murder was named “a noteworthy traditional mystery” by Writer’s Digest, and her novels The Big Chili and Cheddar Off Dead have both been translated into Japanese. Julia is a member of the Mystery Writers of America, Sisters in Crime, and the Chicago Writer’s Association. She has taught high school English for thirty-one years; she lives near Chicago with her husband, three cats, and a mischievous Labrador named Digby. She has two grown sons. She is a lifelong reader and a writer, and a bona fide introvert.