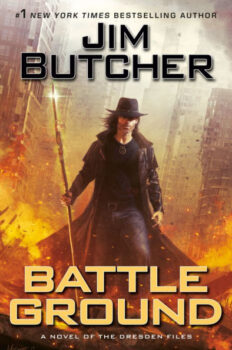 THINGS ARE ABOUT TO GET SERIOUS FOR HARRY DRESDEN, CHICAGO’S ONLY PROFESSIONAL WIZARD, in the next entry in the #1 New York Times bestselling Dresden Files.

Harry has faced terrible odds before. He has a long history of fighting enemies above his weight class. The Red Court of vampires. The fallen angels of the Order of the Blackened Denarius. The Outsiders.

But this time it’s different. A being more powerful and dangerous on an order of magnitude beyond what the world has seen in a millennium is coming. And she’s bringing an army. The Last Titan has declared war on the city of Chicago, and has come to subjugate humanity, obliterating any who stand in her way.

Harry’s mission is simple but impossible: Save the city by killing a Titan. And the attempt will change Harry’s life, Chicago, and the mortal world forever.

Jim Butcher is a ten-year-plus student of martial arts and a skilled rider who has performed as a summer camp horse wrangler and in front of large audiences in both drill riding and stunt riding exhibitions. He also enjoys fencing, singing, songwriting, and live- action gaming. He works as a computer support technician, although he has held a variety of jobs in the past, from fast-food management to door-to-door vacuum selling. Jim lives in Missouri with his wife, son, and a houseful of computers.

In Jim's own words, his first attempt at a novel — when he was just 19 — 'was horrible. Really bad.' Fortunately for his many fans, he kept learning, and writing, until he could bring Harry's not-quite-Chicago to technicolor life.