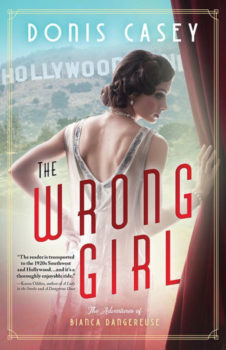 The Wrong Girl
by Donis Casey

They say a life well-lived is the best revenge…

Blanche Tucker longs to escape her drop-dead dull life in tiny Boynton, Oklahoma. Then dashing Graham Peyton roars into town. Posing as a film producer, Graham convinces the ambitious but naive teenager to run away with him to a glamorous new life. Instead, Graham uses her as cruelly as a silent picture villain. Yet by luck and by pluck, taking charge of her life, she makes it to Hollywood.

Six years later, Blanche has transformed into the celebrated Bianca LaBelle, the reclusive star of a series of adventure films, and Peyton’s remains are discovered on a Santa Monica beach. Is there a connection? With all of the twists and turns of a 1920s melodrama, The Wrong Girl follows the daring exploits of a girl who chases her dream from the farm to old Hollywood, while showing just how risky—and rewarding—it can be to go off script.

Other Books by Donis Casey 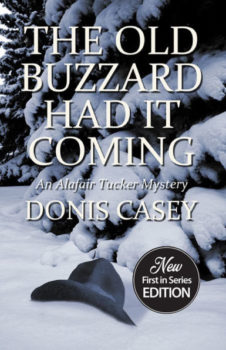 The Old Buzzard Had It Coming
Alafair Tucker Mystery Book 1

Donis Casey is the author of five Alafair Tucker Mysteries, The Old Buzzard Had It Coming, Hornswoggled, The Drop Edge of Yonder, The Sky Took Him, and Crying Blood (Feb. 2011). She has twice won the Arizona Book Award for her series, and been a finalist for the Willa Award and the Oklahoma Book Award. Her first novel, The Old Buzzard Had It Coming, was named an Oklahoma Centennial Book. While researching her own genealogy, she discovered so many ripping tales of settlers, soldiers, cowboys and Indians, murder, dastardly deeds, and general mayhem that she said to herself, “Donis, you have enough material here for ten books.” The resulting historical mystery series, set in Oklahoma in the booming 1910s, features the sleuthing mother of ten children. Donis is a former teacher, academic librarian, and entrepreneur. She was born and raised in Tulsa, Oklahoma, and now lives in Tempe, AZ, with her husband, poet Donald Koozer.