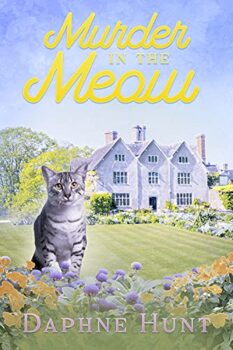 Murder in the Meow

Murder in the Meow
by Daphne Hunt

Osiris may be descended from Egyptian Pharaoh cats, but even he’s not above solving a murder … Will his new human, Pepper Park, a young American lawyer on a holiday, be up to the challenge?

This was supposed to be a normal vacation for me to get away from legal work. Just renting a little cottage in an idyllic English town for the summer. It wasn’t supposed to involve the two things I dread the most…murder and cats.

After just one day of being settled into my picture perfect life at the cottage, the man who lives in the fancy manor house next door ends up dead and a priceless Egyptian artifact from his travels goes missing and I’m the one to blame.

As if things are bad enough, being suspected of murder, this darn cat keeps showing up at my house every night, and he won’t leave me alone. I’m starting to suspect he’s trying to tell me something.

The last thing I want is to go sleuthing under cover of darkness in the English countryside to find a murderer with my only companion being a pushy Egyptian Mau cat, but it just might be what I have to do in order to enjoy the rest of my vacation.

Other Books by Daphne Hunt 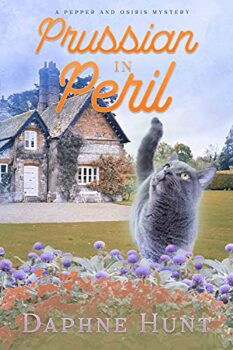 Daphne Hunt has two obsessions: animals and Halloween! That’s why she loves to write cozy paranormal mysteries with witches, cats and bats, or why she’ll be writing the who-dun-it mysteries where animals aid their human heroines and heroes solve crimes. She may have had a subscription to Cat Fancy Magazine as a kid…but don’t tell her mother! She’s a mother to three loveable furbabies: a wheaten terrier (Evie), a miniature schnauzer (Fritz) and a Turkish angora cat (Tiki). When she’s not plotting murder…on the page of course…she’s often found on adventures with her two “terrier terrors” or she’ll be cuddling her sweet Tiki and catching up on Netflix shows. You might see Daphne cruising about the coffee shops and cafes in Tulsa, Oklahoma while she quests for a fun place to write and be out in the world for inspiration on her next cozy mystery!