Shadow in the Desert

Shadow in the Desert
by Becca Jameson

After a disastrous career-ending mission, he never expected to be sent back into the shadows.

For months Ajax has been languishing on his sister’s couch, drowning himself in beer and whiskey. It was the only way to bury the pain of losing his entire SEAL team during a mission he does not remember. Until he discovers everything he’s been told about that day was a lie. Now he’ll jump on the first flight to Ethiopia with Ryker—his best friend, teammate, and foster brother—to rescue the rest of their team.

Serena has a heart of gold and a desire to help people. She’s never physically met the woman she works for, but she knows every job she does saves lives and corrects injustices. Serena’s task is to dole out assignments, be the liaison. Participating in the missions themselves has never been required…until now. Her history has made her vital to the mission.

Serena isn’t prepared for the brooding man who looks like he’s going to take down the next person he sees with his eyes alone. Nor is she prepared for the way his intensity makes her feel things she never expected in this lifetime.

Ajax is not pleased that Serena will be accompanying them. She doesn’t belong in a war zone. But when the slight woman flattens Ajax on his back on day one, he has a change of heart. Maybe she’s not as soft as she appears. He needs her help, and she needs him. But will her presence endanger the entire mission?

Other Books by Becca Jameson 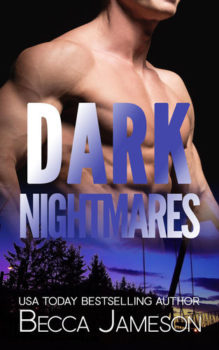 Becca Jameson is a USA Today bestselling author of over 70 books. She is most well-known for her Wolf Masters series and her Fight Club series. She currently lives in Atlanta, Georgia, with her husband, two grown kids, and the various pets that wander through. She is loving this journey and has dabbled in a variety of genres, including paranormal, sports romance, military, and BDSM. A total night owl, Becca writes late at night, sequestering herself in her office with a glass of red wine and a bar of dark chocolate, her fingers flying across the keyboard as her characters weave their own stories. During the day—which never starts before ten in the morning!—she can be found jogging, floating in the pool, or reading in her favorite hammock chair! …where Alphas dominate…