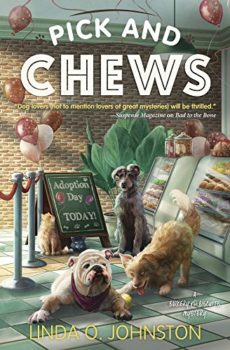 I just attended Malice Domestic, a wonderful conference for writers and readers of traditional mysteries, held each year in Bethesda, Maryland.  While there, I was fortunate to be one of the participants in an event called Malice Go Round, where the authors who want to participate are chosen randomly, then, in pairs, go from table to table in a room filled with fans and describe their latest releases to them in a quick, timed session.  I was on the waiting list but still managed to be one of those authors.  And my mind still reels with the description of Pick and Chews that I gave them!

As a result, I’ll do something similar right now.  Here goes:

My protagonist Carrie Kennersly is a vet tech who bought a bakery from a friend who was moving away and turned half into a barkery.  In the first book in the series, someone living in that small, fictional town of Knobcone Heights got mad at her for competing with that person’s pet store–and that person was murdered.  Carrie was the main suspect so she had to figure out who the murderer was.  Since then, she’s been very successful at solving other local murders.  She also developed a romantic relationship with a veterinarian at the clinic where she works–and he kept telling her not to get involved, it’s too dangerous.

Well, in Pick and Chews that veterinarian becomes the main suspect in another murder and guess what!  He backs down a bit on telling Carrie to stay out of it, although he does tell her to be careful.

That’s it, kind of.  To keep it interesting for me and the other author who joined me I changed things a bit now and then, but I won’t do that now.  Anyway, the event was fun–and I think Pick and Chews is, too! 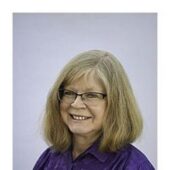 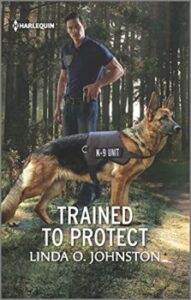 Linda O. Johnston is giving away a copy of TRAINED TO PROTECT to one winner. (winner's choice of print or Amazon eBook)