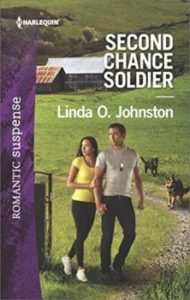 I blogged last month, and even in January, about the fast-approaching publication date for my first book of the year, Second Chance Soldier.  And now it has been published!

Its official print publication date was March 6, just a couple of days ago, and its e-version became available on March 1.

I’m lucky enough to be able to say that I’ve had a lot of books published over quite a few years, so you might think I wouldn’t get very excited about a new one.  Several series, too.  But I’m always excited, and this one is special.  Well, okay, they’re all special, but I’m pleased that at least at the moment all of the books I’m writing involve dogs.  Although this is not my first Harlequin Romantic Suspense book, it is the first one to feature dogs–and also the first in a miniseries.  The second K-9 Ranch Rescue book, Trained to Protect, will be released in October 2018.

Here’s the back cover blurb for Second Chance Soldier:

Devastated after her father’s murder, Amber Belott wants to keep his legacy alive by saving his K-9 ranch. Her first move? Hiring Evan Colluro, a former military K-9 trainer, who impresses—and attracts—her. If only she weren’t his boss…and his past didn’t trouble him. Evan joins Amber in investigating. But when chaos erupts, it threatens all that’s drawing them together.

So… romance.  Suspense.  Dogs.  This was definitely enjoyable to write, and I look forward to hearing from people who read it, too.

Linda O. Johnston, a former lawyer who is now a full-time writer, currently writes for Harlequin Romantic Suspense. Her stories include the upcoming Shelter of Secrets miniseries and the K-9 Ranch Rescue miniseries, as well as stories for the HRS ongoing Colton series. She also writes mysteries, which have included the Barkery & Biscuits Mystery Series and Superstition Mysteries for Midnight Ink, and the Pet Rescue Mystery Series and Kendra Ballantyne, Pet-Sitter Mysteries for Berkley Prime Crime—with more to come. And nearly all her current stories involve dogs. 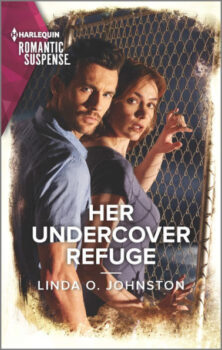 Linda O. Johnston is giving away a copy of HER UNDERCOVER REFUGE to one winner. (winner's choice of print or Amazon eBook)