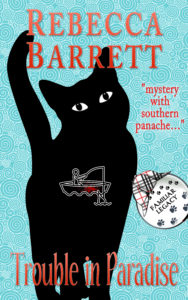 If you were a cat, and not just any ordinary cat, but a sleek, black cat detective who rivals Sherlock Holmes in his ability to ferret out crime and solve murders, what would you sound like? Well, Benedict Cumberbatch, of course.

Writing about anthropomorphic characters is a new twist for me but I find I’m truly loving it. Trouble, the black cat detective, is no Peter Rabbit or Pooh. He’s a straight up sophisticated man about town with an attitude and a skill set not unlike Cumberbatch as Sherlock. He also has the British accent as the cherry on top.

Do not confuse Trouble with cartoon characters or Grimm’s fairy tale creatures. Nor is he like Tarrant Hightopp or the Red Queen in Tim Burton’s Alice in Wonderland. He fits into a world that you and I would consider very real. He doesn’t speak to the human characters in the vein of some TV series of the past, but he makes himself understood, nonetheless.

Join Trouble in his latest adventure and newest case. He’s in Key West at the Paradise B & B and he’s on a mission to solve the mystery of the dead body in the Toucan Suite. The Hemingway cats, Megs and Bartholomew, confuse the matter more than they help. Or so it seems.

Trouble has also been known to dabble in romance in his past escapades and Trouble in Paradise is no exception. It’s his job to see that Ginger Browne, the proprietress of the Paradise, and Trout Richardson, the mysterious boat captain, keep their minds on solving the murder and finding a missing treasure rather than each other. At least temporarily. The future of Ginger’s establishment depends on it.

I hope you’ll join Trouble as he gets to know the quirky characters and strange ways of the Conch Republic. It is truly a world unto itself. 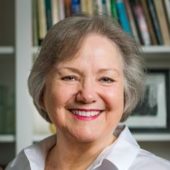 Rebecca Barrett writes historical fiction, post-apocalyptic fiction (writing as Campbell O’Neal), children’s stories, and short stories of life in the South. An avid reader all her life and a product of “front porch” socializing, she became a story-teller at an early age. Her current novel, Trouble in Paradise (available now), features that handsome, sleek, black cat detective, Trouble. This is a new series with multiple authors (The Mad Catters) who follow the antics of super-sleuth Trouble as he lands in first one crime scene then another. Of course, the humans help a little. These romantic mysteries are fun and light hearted and just perfect for a beach read or a rainy day. Visit the author’s website at rebeccabarrett.com to enjoy some of her short stories.